ADDI-DATA GmbH is an expanding international company based near Baden-Baden in Baden-Wuerttemberg, in the south of Germany. Since 1984 the company has been developing high-tech solutions for industrial measurement and automation. It stands for quality, adaptatibility, reliability, security of investment and spirit of innovation. You will find ADDI-DATA solutions worldwide in numerous industrial areas: automotive and metal industry, engine building industry, tailor-made machinery, aircraft and chemicals industry, etc. They are used for quality control, process control, signal switching, data acquisition, motion control or position acquisition.

The new intelligent Wi-Fi Ethernet systems of the MSX-WL series allow precise data acquisition and reliable signal output directly in the field. The systems can be easily configured from a workplace in the company network. The user can adapt the configuration and read the acquired data using mobile devices (such as tablet, smart phone, etc.) through the MSX-APP Manager for Android.

The intelligent Ethernet systems of the MSX-E series are especially suited for industrial measurement, control and regulation tasks directly at the measuring point.
They are mounted in robust metal housings and comply with the degrees of protection IP67/IP 65/IP 40. They can be used in a temperature range from –40°C to +85 °C as they are equipped with many protective circuits. The Ethernet systems can be freely daisy-chained and synchronised in the µs range. Sensors can be connected directly to the measurement systems through screw connectors.

With the sophisticated and reliable ADDI-DATA PC boards, your measurement and automation tasks will be a success! High quality products, well thought-out design concepts and robust constitution guarantee a reliable function of ADDI-DATA PC boards in a harsh industrial environment.

For more than 25 years, ADDI-DATA has been developing interference-free PC boards for industrial measurement and automation.

ADDI-DATA offers PCI Express boards for use in industrial environment. They are especially designed for the reliable use in harsh industrial environments and have many protective features, such as protection against short circuits and overvoltage, optical isolation, input and output filters, etc.

ADDI-DATA offers a wide range of PCI boards, which are especially designed for the reliable use in harsh industrial environments. The measurement boards are equipped with a lot of protective features, such as protection against short circuits and overvoltage, optical isolation, input and output filters, etc.

If your applications are subject to vibrations, high temperatures and extremely severe industrial conditions, you have to rely on the robustness, reliability and modularity of the CompactPCI systems.

instruNet is a family of data acquisition hardware that provides ten’s of microVolts of absolute accuracy instead of ten’s of milliVolts, at the same cost, and at the same throughput rates as the typical general purpose data acquisition board. It does this with a completely different topology where the analog electronics are put close to the sensor in electrically quiet boxes outside of the computer, and the noisy digital electronics are left inside the computer.

Reduce noise by placing instruNet near sensors and up to 100 meters from noisy computer. Shown above is 2.5 µVrms internal noise (1Ks/sec, ±10mV range)

Cards easily plug into a 4, 8, 12 or 16 slot card cage that communicates with Windows computer via USB 2.0

Microstar Laboratories produces a line of Data Acquisition Processor (DAP) boards, each with an onboard processor, memory, and a dedicated, multitasking, real-time operating system: DAPL. With this onboard intelligence, a DAP board can handle time-critical aspects of an application without any delays or resource demands imposed by Windows or by other software running on the PC.

As well as providing DAPL software to run on DAP boards, we develop and ship PC software to support DAP boards in many user environments. All our design follows a channel architecture that makes it easy to connect our hardware to a large array of sensors and actuators. 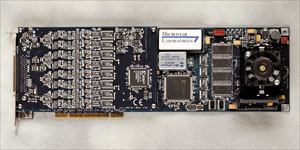 Data Acquisition Processor boards each have an onboard processor, making every DAP an intelligent solution for data acquisition and control applications.

The xDAP line of Data Acquisition Processor systems combines high performance analog interface with a speed-optimized USB host connection. Each xDAP has onboard storage for a minute of buffered data at maximum rates and autonomous sampling is controlled by a 2 GHz Intel processor. xDAP 7420 doubles the maximum per-channel sampling speed to 2M samples per second.

xDAP 7410 is an EU-qualified model that features an aggregate 8M samples per second with high-speed simultaneous sampling and new input options. The DAP 5200a model brings many real-time data acquisition and control applications within the scope of Windows systems. Its onboard 400 MHz processor provides real-time processing power for functions including smoothing, filtering, FFT, PID control, and responding to alarm conditions. The DAP 5200a also can scan high-speed data for trigger events in real time to capture pre-trigger as well as post-trigger data.

The iDSC 1816 board combines 16-bit resolution on eight simultaneous channels of data acquisition with brick-wall anti-alias filters on each channel. The board applies 8 onboard first-stage analog filters to its 8 simultaneous inputs, followed by digital filtering on two DSP chips, and this provides 96dB (sixteenth bit) stopband rejection within one quarter-octave. Performance like this really matters in sonar and in other spectral analysis applications: monitoring vibrating and rotating assemblies in the automotive, aerospace, and power generation industries, for example. Use the DAP 4000a in applications that require moderate real-time processing. The DAP 840 has all of the features needed for an entry-level data acquisition or control application with light real-time processing, and provides all of the benefits of onboard intelligence. When your application needs Pentium-powered real-time processing under Windows, choose the DAP 5000a. Even at maximum sampling rates, the combination of a fast processor with low latency allows computation in real time between samples – and on-time response for control applications. The DAP 5000a can acquire 14-bit data at up to 800k samples per second, and can convert 833k values per second on each of the two onboard analog outputs. DAPL, the onboard operating system, provides all the commands you need to run data acquisition and control applications.

Software, including DAPstudio, third-party, or custom software, that runs on the host PC – under a choice of operating systems – acts as the user interface for the Data Acquisition Processor, and provides disk logging and graphing capabilities.

Select one of the three DAPtools software distribution package levels – Basic, Standard, or Professional – to obtain the combination of software required to implement your application.

SORCUS began in 1986, develops and produces intelligent PC-boards and parallel-computing systems based on PCs and embedded systems. The main area of application of our standard products are industrial controlling, measurement and communication. Our customers are mainly big and international operating industrial enterpises.

CANbox® = Dual CAN to WLAN Converter The CANbox® can send and receive CAN data via one or two CAN interfaces, add a time stamp, buffer the data and transmit them wirelessly via WLAN respectively LAN. The CANbox® can be configured only to accept specific identifiers (acceptance filter). The CANbox® can operate in a temperature range from –20 to +70°C.

Embedded-PDA with X-Scale-CPU!
About 80 different types of I/O and communication MAX-Modules are currently available. Carrier boards can be adapted to any measurement and control task through these modules. The MAX5dip and MAX8dip are intelligent, decentralized peripheral devices capable of autonomous operation in a small, compact housing for mounting to a top-hat rail with low installation depth. It can be used, independently of a PC, for measurement and control purposes. Modular PCI card for MAX modules! It can be operated in any PC with PCI slots, either as a passive card or, when fitted with MAX modules with CPU, as an intelligent card. MAX modules are simply inserted according to the particular need for inputs and outputs or for computing power.