Nanotechnology, is the study of the control of matter on an atomic and molecular scale.

Generally nanotechnology deals with structures of the size 100 nanometers or smaller, and involves developing materials or devices within that size. Nanotechnology is very diverse, ranging from novel extensions of conventional device physics, to completely new approaches based upon molecular self-assembly, to developing new materials with dimensions on the nanoscale, even to speculation on whether we can directly control matter on the atomic scale. 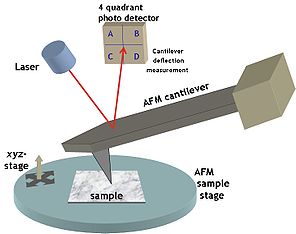 The atomic force microscope (AFM) is a type of scanning probes that helped launch nanotechnology.

Typical AFM setup. A microfabricated cantilever with a sharp tip is deflected by features on a sample surface, much like in a phonograph but on a much smaller scale. A laser beam reflects off the backside of the cantilever into a set of photodetectors, allowing the deflection to be measured and assembled into an image of the surface.

Scitech offers tools such as an atomic force microscope AFM, to help assist viewing, measuring and analysis particles in the nano-scale